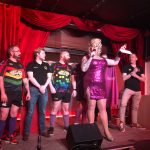 Following the sickening theft of the monies raised at Eagle Bar’s World Aids Day event the weekend before, the popular gay men’s bar on Bloom Street in Manchester appealed to their patrons and friends across the Gay Village to rally together and support a re-run of their fundraising Cabaretfest 2019 one week later.

After receiving an overwhelming wave of support throughout the week, the bar was able to re-stage the event and managed to raise even more than the previous week. This included a cheque donation of £502.96 from the Spartans, presented on-stage to the drag host KY Kelly, by Gareth Longley, Chair of the world-famous, Gay and Inclusive Rugby Club.

In total, alongside contributions from card donations and an additional £2000 from the bar itself, £4420.48p was raised on the night for the Manchester World Aids Day Partnership – part of The Passionate about Sexual Health (PaSH) Partnership – a collaboration between BHA for Equality, George House Trust and the LGBT Foundation.

The PaSH Partnership delivers a comprehensive programme of interventions to meet the changing needs of people newly diagnosed with HIV, living longer term with HIV or at greatest risk of acquiring HIV.

Speaking at the event, Mr Longley was delighted that his brothers and sisters in rugby had really pulled together for such an important fundraiser. “We were sickened to find out about the theft of those donations last week and being a rugby club named after the gay village, immediately wanted to do our bit to support Eagle’s re-run and bolster the fundraising efforts in any way we could.”

He continued, “Not only were some of our lads willing to get up on stage for KY Kelly but our supporters and players who couldn’t make it really dug deep and helped boost the donation that the club wanted to provide as a symbol of our support for the HIV charities doing such an amazing job around Manchester.”
In a post released Monday afternoon on Facebook, the management at the bar commented, “We raised more money yesterday than on World AIDS Day itself – showing our thieving friend that the spirit of our community is worth more than the material amount he stole. We made lots of new friends, and friendships whilst others were strengthened.”
For more information on The PaSH Partnership, visit their Facebook page https://www.facebook.com/McrWorldAIDSDay

Support for those living with or affected by HIV
http://www.ght.org.uk/