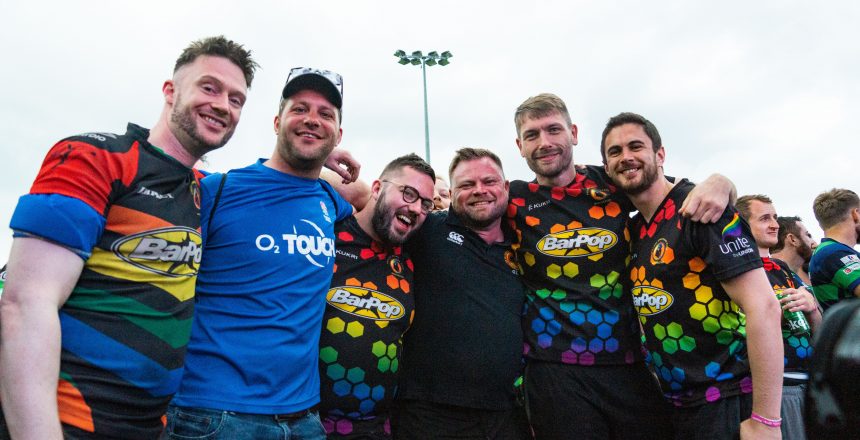 Manchester Village Spartans RUFC, one of the world’s first gay and inclusive rugby clubs established in 1999 and one of the original founding clubs of International Gay Rugby are thrilled to announce their inclusion in the Sports Allies “Spotlight” Series of Short films celebrating NATIONAL INCLUSION WEEK in the United Kingdom.

The film, produced by London Film School, followed the pioneering Rugby Union club as they attended the bi-ennial ‘Union Cup’ tournament, the eighth since the tournaments inception in 2005 and held this year in Dublin.

The Manchester Village Spartans’ 1st XV team reached the live-streamed final of The Union Cup against their oldest friends and rivals, the Kings Cross Steelers 1st XV who’s powerful performance ultimately sent the Union Cup to London for a seventh time following a score line of 65:0.

“To reach the final, in this, the biggest Union Cup to date, is a terrific achievement – especially because 2019 marks our 20th Anniversary as the world’s second-ever gay rugby club still in existence” said Dean Bee who stepped down as the Spartans’ Chair this summer but continues as International Gay Rugby’s Europe Trustee.

“A game back in 1999 in Manchester between ourselves and the Steelers effectively helped to kick start the whole International Gay rugby scene, so to go head to head with the Steelers in this year’s Union Cup final, with Nigel Owens as the referee and for our campaign to be documented throughout for such a superb cause as Sport Allies, was absolutely cracking.”

The Spartans didn’t leave empty handed though, with their 2nd XV victors in The Challenger Club, after a nail-biting final against fellow Gay and Inclusive rugby club, The Liverpool Tritons at the DCU Sports Complex in Ireland, attended by over 1000 players and spectators from across the UK and Europe.

The Spartans 2nd team went undefeated throughout their campaign and performed exceptionally in a closely matched final game with a score line of 10:5 to the lads from Manchester.

The club recently celebrated their Union Cup achievements with a host of VIP guests, including Angus Malcolm and Tristan Latarche from Sport Allies at a huge fundraising Gala as part of their 20th Anniversary Celebrations.

The audience were treated to a sneak-peak of the film and all 250 guests – including rugby legends Chris Robshaw and Brian Moore and Equalities Minister, Baroness Williams of Trafford seemed   captivated by the portrayal of the Spartans in the moving and honest film.

Players featured in the film represented a broad cross-section of the diverse club and included Neil Gallagher, who’s rationale provided in the film for joining an Inclusive Club as a Straight man prompted spontaneous applause from the audience.

Archie Taylor’s explanation that the Spartans are his family – a home away from home – also prompted gasps of emotion from the audience – which actually included his family, visiting Manchester especially for the occasion.

Club Chairman and 2nd team coach Gareth Longley and one of the interviewees in the film commented, “This is such a big year for us and an Inclusive Rugby milestone, so to take centre stage at such a popular, professionally managed and huge tournament was the icing on our 20th Birthday cake so to speak.”

Gareth continued, “We’re so proud to be Spartans and incredibly pleased that our most successful International Gay Rugby tournament has been captured on film so beautifully by Sport Allies and London Film School to be shown on Sky Sports!”