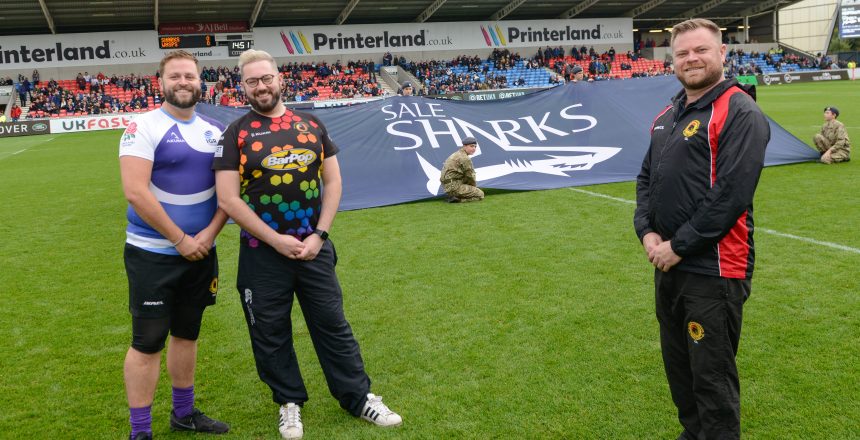 Manchester Village Spartans RUFC, one of the world’s first gay and inclusive rugby clubs, were welcomed to the AJ Bell Stadium on Saturday 5th October to help them mark the International Gay Rugby (IGR) #PrideInRugby Anniversary Weekend as guests of the Sale Sharks.

The 3-day International Gay Rugby (IGR) celebration was the first of its kind in IGR’s history and coincided with the historic signing of an anti-LGBTphobia commitment in Japan at the Rugby World Cup and saw over 80 teams from all around the world participating in events to acknowledge the strides taken over the previous 20yrs and to promote continued inclusion in rugby.

The Village Spartans, based in Sale, were one of the IGR association’s founding clubs and were delighted to be invited to watch the Shark’s victory against the London Wasps in the Premiership as guests of the Sale Sharks who throughout the decades have been active supporters of the Spartans, helping them with coaching and development as members of their 100 Club partnership scheme.

Head of Brand at Sale Sharks, Jonny Acheson commented, “It’s great to see the success of Gay and Inclusive Rugby around the world today and worthwhile celebrating clubs like the Spartans, who make up the IGR, who are creating an ever-healthier and even more encouraging environment for new players to pick up the sport we all love”.

“It’s even better knowing that it’s the efforts of a local Mancunian club that has contributed so much to this change over the years, especially given the Sharks have proudly been there alongside them and helped them out with coaching and development over the years too”, Jonny added.

Gareth Longley, Chairman at Village Spartans agreed. “We’re delighted to have such a great ally in Sale Sharks and hope that more and more Professional clubs continue to follow the Sharks’ lead in standing up for Inclusive rugby.”  He continued, “Every 1st Team Sale Sharks player participated in our ground-breaking Photography fundraiser called “Portraits of Pride” this summer and it’s a prime example of how keen our Premiership neighbours have been over the years to support the growth of LGBT inclusion on and off the field, so it was the icing on the cake to come down to the AJ Bell and watch some terrific rugby as part of IGR’s Anniversary Weekend.”

The Spartans dashed from Sale Sports Club to get to the stadium on time, following their own fixture on Saturday which saw their 2ndteam compete, dressed as Comic Book Superheroes, alongside other northern IGR clubs, The Chester Centurions and Liverpool Tritons – in a friendly that raised money for the mental health charity, State of Mind Sport.

Some of the limited-to-one, gallery prints signed by each of The Sale Sharks’ first team, shot by top London Photographer, Andy Barnham, are still available to purchase online at www.portraitsofpride.com with all the money going to help grow Inclusive Rugby participation across the northwest.