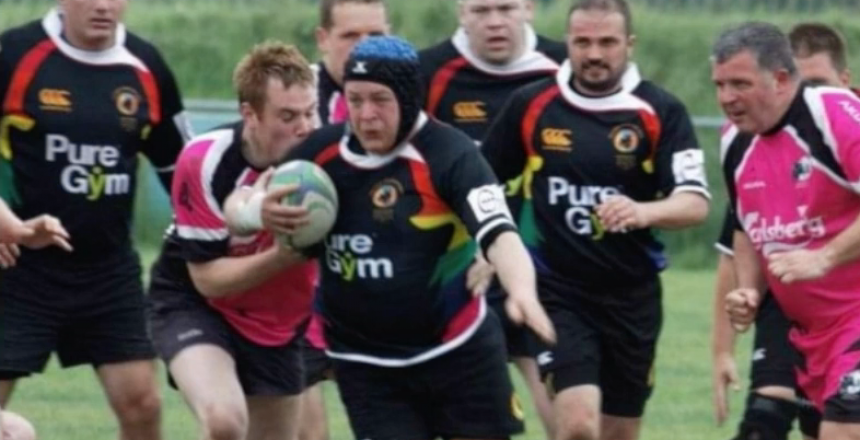 All of us at the Spartans are incredibly sad to have learnt of the passing of our former player, brother in rugby, and life long ally, John Whittaker.
John battled with cancer with the same passion and determination he showed each time he pulled on our Jersey.
Our incredible friend made an instant impression, with his handling skills, his rugby league dump tackles, and dogged determination. He made sure someone knew they’d been tackled, but also built up skills in line outs, scrummaging and most of all ball carrying. You always knew you had support if you you knew you were going into contact with John on your side.
John and his wife Sarah have been fantastic allies for the LGBTQ+ community for many years, and Sarah would be a familiar face to many as she worked on the door of many village venues.
On their wedding they made sure they ended the night down Canal Street to celebrate with their friends and end their reception by getting messy in Cruz 101. They took us into their new family and John is part of Spartan’s history by being one of only 2 players to bring their son to play with the club.
His wife Sarah and his brother-in-law were part of the club furniture with their frequent attendance to support John and their Spartan’s brothers.
On the Bingham Cup 2012 he had a whale of a time, got properly stuck into the tour and went out of his way to try to put a shoulder in on Ben Cohen who decided to play with both teams. The next season however, he and Sarah moved to Perth Australia. He always kept us close to him and wore his Spartan’s shirt with pride.
In 2014 he even took time off work and travelled across Australia to play with his teammates – old and new – for one last time for the Bingham Cup. It reminded us all what a quality player he was, and how much him and Sarah were missed.
It has been a delight to see him and Sarah start a family together and they have shared their kids progress so we can all see how wonderfully they are developing down under. It’s always great to see new members of the extended Spartan’s family. It was clear to see the amazing life Sarah and John were providing for them in Perth and the love eminnating from each post was palpable.
John pursued his later health fight with his trademark smile, guts, and determination and continued to wear his Spartan’s shirt with pride to the end.
I do not use these words lightly, but he is a club legend; A great father, husband, brother in law, grandfather and true Spartan and LGBTQ+ ally.
All the Spartans, both here and around the world, send our love and condolences to his whole family and want them to know John is our Brother in Rugby forever and his whole family are part of our family.
In the same way and with same gusto he always did we call out one last time to this legend: one, two, three……. Spartans
Marlon Morais-Hall
Honorary Club President
On behalf of the entire Manchester Village Spartans family.