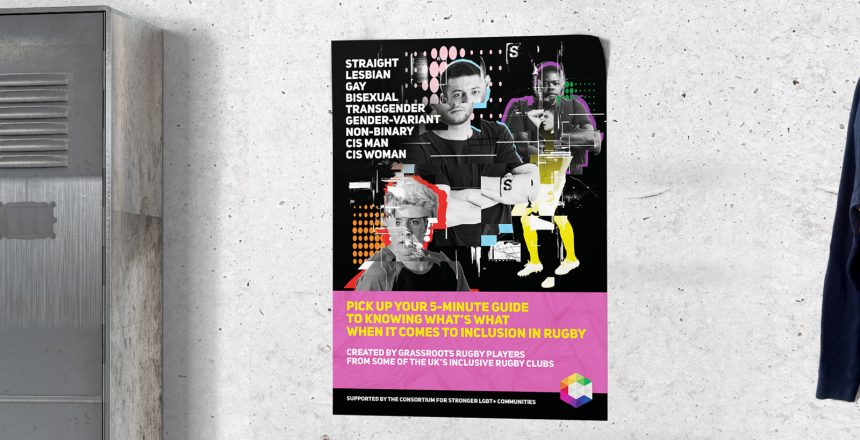 Manchester Village Spartans RUFC are producing materials for distribution by their friends in Inclusive Rugby across the UK, that seek to help all grassroots rugby clubs better understand some of the issues surrounding gender identity and a player’s sexuality.

Originally due to be issued at the start of the 2020/21 playing season and now set to go live for the 21/22 rugby season, the campaign (which was held back due to the national lockdowns) will provide quick hints and tips for players and clubs in a simple, folding leaflet and poster in the hope that they can quickly become more knowledgeable and feel more confident when supporting their players and members. Ultimately becoming more inclusive and welcoming.

“Rugby, as a game, already thrives on the differences between us and the huge growth in inclusive rugby across the UK demonstrates there is an opportunity for growth when clubs build more inclusive teams and embrace diversity.”

“We believe that when a club is better informed and confident about how to deal with a player’s or new recruit’s sexuality or, gender identity, they’ll be better equipped to more actively recruit people who, may well be itching to pick up the sport but, currently don’t feel welcome.”

“We have listened to and worked with players in our own club and from several inclusive rugby clubs across the UK – and especially importantly, our Transgender and non-binary colleagues – who have massively informed what should go in the leaflet.”

“Because of this collaboration, we’ve been able to simplify lots of rules and regs into down-to-earth, practical rugby advice and, by tackling misconceptions and breaking down stereotypes, are able to show how some tiny changes in behaviour can make a world of difference to players who may feel excluded by a club.”

“Rugby is an amazing sport that people of all genders and sexualities often love just as much as the next person.  But too little time, fear, conflicting messages and rulings such as the leaked proposal from World Rugby can and does unfortunately often create more hostile and closed club environments even at grassroots.”

“I can’t say loudly enough just how important it can be and how much of a positive impact a club can have on someone’s life, that ALL players – regardless of their gender or sexuality – should be allowed to play the sport they love and for responsible clubs to top up their knowledge – these hints and tips will take 5 minutes to read – so that they know how to support a more diverse squad of players and contribute to a better society by making people who feel outcast, feel welcome and part of a team.”

In addition to an A5 booklet that opens up into an A3 Poster for display on a Club’s notice board, the campaign will issue Vox Pop Video messages and provide a hub online so that clubs can quickly and easily access all the latest info and links to welfare advice and relevant governing body articles.

Manchester Village Spartans are proud to have worked closely with England Rugby to promote Inclusive Rugby across England through campaigns such as Try For Change and Spirit Of Rugby 2012 and are pleased that England Rugby have stated that Transgender Women will still be allowed to play women’s rugby at all non-international levels of the game in England for the foreseeable future.

The Spartan’s idea to produce materials that encourage greater inclusion within grassroots rugby has been made possible with the support of the LGBT Consortium.

If you’d more information or want to request some booklets to hand out to your local clubs (or leave with your opponents after a fixture) please contact pr@villagespartans.co.uk