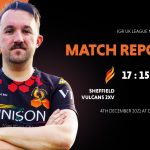 The Village Spartan’s 2B’s headed to Sheffield to play the Sheffield Vulcans in the IGR League.

In atrocious conditions, movement up the pitch was short and the ball stayed in hand and in the middle of the park. The two sides were evenly matched.

The opening score came from the Vulcans who broke down the right side through the backs, and the Spartans defended the tryline beautifully for multiple phases before the Vulcans pressure told and were able to score.

Not to be deterred, the Spartans evenly contested the game. With the wind and rain making ball handling so difficult, attacks were forced to go through the forwards. Unfortunately the ball proved too slippery on occasions and the Vulcans were let off.

Towards the end of the first quarter the Vulcan’s took control. After picking the ball up in his own half, the Vulcans’ fullback carried the ball past multiple tackles and was able to play the ball out wide to the right wing. From there, the Vulcans made it down to within metres of the try line. Although the Spartans again defended through multiple phases, the Vulcans found enough strength to get the ball down and bring the score to 12-0.

The cold was turning on the players with multiple knocks and shocks affecting both sides. Undeterred, the 2XV-Bs came together and continued to play some of their best rugby, with forwards in particular taking big hits trying to find a try.

Just after half time the Spartans forwards piled in together in the Vulcans 22 and, after much pushing, lock Tom Vosper found the tryline and brought the Spartans back into the game at 12-5.

With the momentum on their side, the B’s pushed for their second try.  Backs, including Gazz Pashley and Robbie Young, now carrying with ferocity to rival the forwards and forced the Vulcans into big hits and hard work to defend themselves.

Having absorbed the pressure, the Vulcans were able to kick downfield. The chasing pack were able to overhaul the Spartans defence and scramble the ball over for their third try and the score now 17-5.

With the conditions affecting the players, the Vulcans were forced into playing with 13 men and the Spartans began to crank the pressure up. Multiple pick and go phases from the forwards – including Chris Eades and Terence Ralph – carried our squad to the 22m line. From there, scrum-half James Anderson sniped down the blind side and shrugged off two tackles to score.

Although the conversion was blown wide by the wind, the 2XV-Bs pushed back again, and powerful running was again the Spartans’ friend. After a handful of phases, Joe Brady was able to crash over in the final minutes, closing out the game just short of the win at 17-15.

Tom Vosper was awarded man of the match. 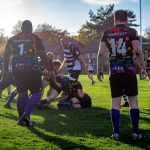 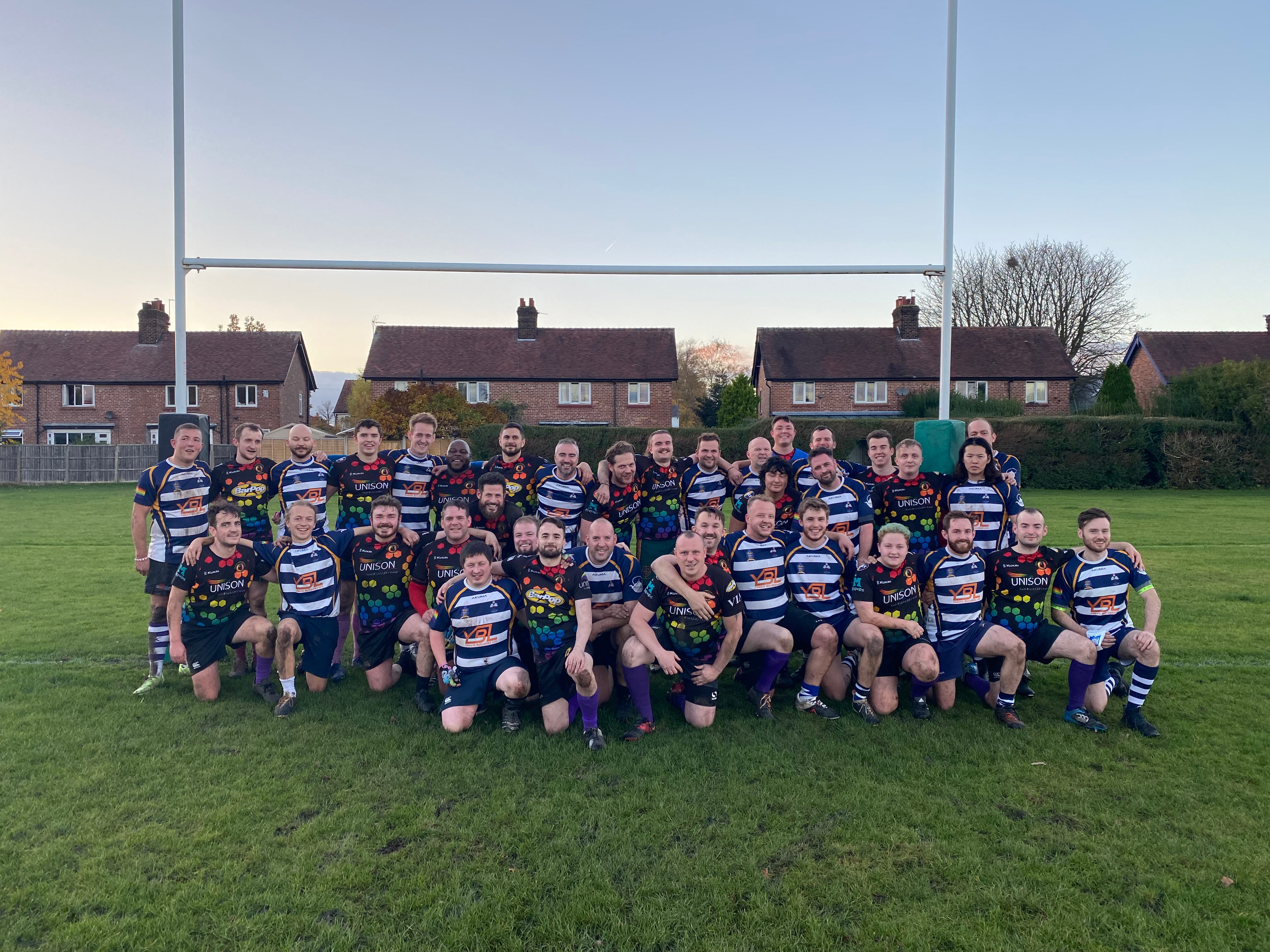 From the kick off the Templars experience was telling as they searched for a breakthrough, and had the Spartans defending early on with great bravery.

The breakthrough came from a set piece that was quickly released to the Templars left winger who broke two tackles and touched down infield, although the conversion was missed.

The Spartans had more defending to do as Templars pressed for a second, and did so admirably with big hits being laid out on the Templars forwards. Multiple phases of play brought Templars to the 5 metre line. From the resulting phase the scrum half broke through to the try line, only for winger Ian Stodart to hold it up superbly, and the Spartans were able to clear.

The Templars movement from the set piece was impressive and from a line out inside the Spartans half, they spread the play quickly and the number 8 broke through the line and touched down under the posts with the conversion successful.

The Templars continued to press but the Spartans – though inexperienced – were not without enthusiasm, and it showed by a wonderful tackle by Rob Barlett on the Scholars 8 that brought an attack to a halt. Minutes later the pressure told though as the Templars scored again to bring the score to 24-0.

The Spartans confidence in their attacks was beginning to grow, with the forwards causing problems for the Templars defensive line. Although they were able to clear with a big kick into space, the Spartans back 3 recovered the ball well, and won a penalty to clear their lines.

After another Templars unconverted try, the Spartans attacking pressure began to grow as breaks from scrum half James Anderson and fly half Chris Goodman took them to the Templars 5 metre line. From the breakdown, Anderson whipped down the blindside and scrambled over to get the Spartans off the mark at 5-29.

The Templars pressed back however, and their wide gameplay brought another try from the left winger.

Back came the Spartans, attacking not only with bravery, but with confidence that forced the Templars into being offside. From the scrum inside the 22, Anderson again peeled away and his momentum carried him over the line to bring the score to 36-10.

However the Templars then took control of the game, their experience and fitness beginning to tell as a flurry of tries in the third quarter took them further ahead.

The Spartans never wavered, even after the tries being scored. Some terrific carries from Chris Hobert and Nathan Colom caused the Templars headaches as they struggled to contain them. Debutant Gus Ihm’s outstanding carry from his own half brought huge cheers from the sidelines – and from himself!

Although the Templars scored another try to take them to 78-10 the Spartans fed off the positive energy and some beautiful teamwork between forwards and backs, as well as some ambitious kicking, saw a scrum at the Templars 5 metre line. Anderson again sped down the blindside and scored for his hat trick.

The Templars pressed back, but the Spartans continued to grow into this game, and huge hits aplenty from forwards and backs limited their experienced opponents to just two further tries. The referee blew the whistle with the final score 15-88 to the Templars.

The scoreline reflected little of the Spartans gameplay, bravery and clear improvement since being formed in the summer. The Spartans man of the match award went to Nathan Gostick with special mention to Gus Ihm for an outstanding first game for the Spartans!