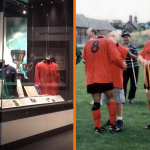 Today, the Spartans say goodbye to David Smyth, our club’s first coach and an instrumental character in the development of what has become IGR International Gay Rugby.

It’s with bittersweet timing that the World Rugby Museum exhibition “Proud to be Steelers” (celebrating the contribution to inclusive rugby that our brothers-in-rugby, the Kings Cross Steelers RFC, have made) opened this weekend.

David loaned the exhibition some memorabilia which will sit alongside other Spartans’ materials that we’re proud are being included as part of the story about the Steelers’ and the growth of Inclusive Rugby.

He’s pictured handing out medals at the historic first match between the Spartans and Steelers, held in Manchester in August ’99.

Viewed as pioneers today, David and these Spartans and Steelers seemed to know things were worth holding on to…. probably because everything they did was a first.

It was David who gave Spartans the credibility and belief to play proudly as a ‘Gay’ team in the ‘Straight’ local RFU leagues. An important step for the club in its quest to challenge LGBT+ stereotypes through sport.

It was David who invited the Steelers, Washington Renegades Rugby and the freshly formed San Francisco Fog RFC over to Manchester in January 2001 for a rugby clinic (that he led) and small competition, at what could be argued became the world’s first international rugby union tournament for gay rugby clubs organised by a gay rugby club.

As a straight, married man, David (along with his son, Chris, who still plays with the Spartans) was there at the reciprocal Washington Invitational in May of 2001.  This is the tournament that would later become the IGR Bingham Cup

Today, thanks to people such as David, we have a vibrant, friendly and hard-working club of over 170 members today and a growing IGR community to play against.

Like the original line-up, today’s Spartans know how to have a good time, balance competitiveness with enjoyment and are helping to grow the world of Inclusive Rugby.  We hope we’ve learnt from our pioneers. Their example encouraged us to help establish the Tritons, Vulcans and Centurions and help England Rugby spread the word about Touch.

And, just as this weekend, when we wanted to remember the inspirational, Mark Bingham, we want to make sure we continue to applaud, elevate and remember our local, homegrown heroes too, like David.

Therefore, on this incredibly sad day, we want to say it loud and proud: “Thank you, David and family.”