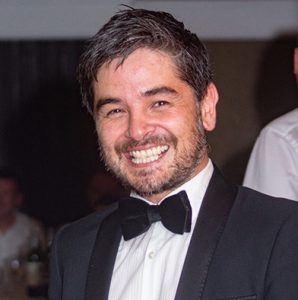 Yosh has worked in Advertising and Marketing for some of the UK’s largest Ad Agencies as Account Director, helping to create some iconic advertising campaigns during his 20yrs in the game. Today he runs his own Creative Marketing Agency and has a range of Clients including IGR and England Rugby.

Yosh has never played rugby (although he does have a black belt in Karate) and wanted to get involved with the Spartans back in 2017 because he kept meeting half of them at parties over the previous six years and felt like they were doing a great thing and looked like they could do with a hand as the club grew and grew around that time.  He offered to help out and cut his Spartans teeth by helping out on their bid to host the Union Cup in Manchester in 2019.

Since then he has tried to tidy up the overall look and feel of the brand, massively grown the social media channels and engagement of fans,  worked hard to strengthen relationships with key stakeholders like the RFU and sought out all sorts of PR opportunities – making sure institutions, broadcasters and publications always feel like the Spartans are a safe pair of hands to deliver great interviews or filming experiences.