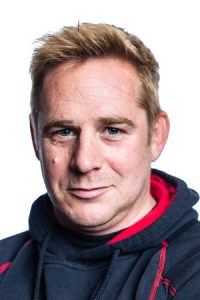 Matt joined the Village Spartans in 1999. Captain for 9 seasons. Chair for 4 seasons.

He still plays today making him one of the longest serving players at any IGR club and one of only 6 players in the world to have played at every Bingham Cup. Vice-Chair of International Gay Rugby for 4 years until 2016 and, since 2010, has been part of each Bingham Cup Tournament Liaison Committee (The Gay Rugby World Cup).  Matt has been Spartans’ Vice Chair since 2015 and was recently elected President of Sale Sports Club – the sports club of which Spartans is part.  Part of the delivery team for the 2012 Bingham Cup, which brought 1,500 participants and hundreds of thousands of pounds into Manchester’s local economy and helped stimulate the rapid growth of Inclusive Rugby across the UK.

Matt works in property development, leading a wide range of specialists to deliver large regeneration projects across the Northwest.

Matt contributes regularly at LGBT service provider and corporate events to promote the sport and build cohesion between the gay and straight communities of Trafford and Greater Manchester and has appeared in many TV and National Press articles over the last two decades, including a Sky Sports News package about the club for Stonewall Rainbow Laces and two appearances on BBC Radio 5Live.