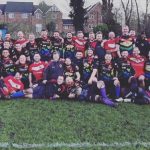 The Spartans welcomed Newcastle Ravens 1XV to Manchester in a game that brought a tight contest last season.

Both teams started at a frantic space with plenty of tackles and contests at the breakdown and limited space to find the tryline. The Spartans contested well at the breakdown with Matt Proctor an early standout performer as the openside flanker.

The Ravens began to edge their way towards the try line after the first quarter. They won a penalty on the Spartans 5m line and were able to crash over on the second phase to make it 5-0.

After their breakthrough, the Ravens took control of a slippery ball between plays. The forwards recovered the ball at the breakdown and swung it wide to their lock, who broke a tackle and fed the winger who was able to add a second score.

The Spartans were not to be deterred and showed great resilience, particularly at the breakdown. with Christian Davis orchestrating attacks from scrum half, the Spartans were pushing well through the forwards and making quick footwork through the backs. However they were unable to reap the rewards of their pressure.

At the half hour mark, as the Spartans were making grounds towards the Ravens tryline, a Spartans pass was expertly picked off by the Ravens centre who sprinted clear to touch down. The kicker added the conversion to given the Ravens some breathing space at 17-0.

Although the the Ravens continued to push for further tries, the Spartans held their defensive discipline and a wonderful tackle from Rob Bartlett sent the winger into touch and stopped a counter attack.

However, 7 minutes the Ravens centre again picked off an attacking pass from the Spartans and raced clear to bring the score to 22-0.

A Spartans score was needed at this point and they found it through fly half Matt Brown just before half time and the Spartans went into the break on a high.

They kept the momentum going in the second half with another score. A long clearing kick from the Spartans bounced favourably for Sam Bailey who offloaded wonderfully in the tackle to Ian Stodart. Stodart was able to beat his defender and touch down to bring the score to 12-22.

After this, the game was very much played in the middle of the park with the referee blowing for infringements at the breakdown and both sides paying the price for some inconsistent temperament.

The Ravens conserved their lead at the hour mark when they turned the ball over at the breakdown. From there, they were patient enough to see out multiple Spartans tackles and multiple phases before touching down. The score coming to 27-12.

The Spartans flexed their attacking muscle, with replacement number 9 Rory Leventhorpe anchoring the attack and a wonderful partnership from thrower Marc Jones to caller Anthony McCaul at the line-out proved threatening but sadly they were unable to add to their 12 points and the Ravens claimed the spoils. 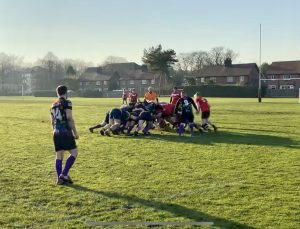