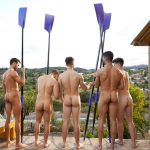 We’re pleased to support our friends at Sport Allies who wanted to let us know all about the launch of the Worldwide Roar.

Warwick Rowers relaunches today as the Worldwide Roar with an invitation to sportsmen everywhere to get naked and get on board. The Roar will build on a decade of learning with a new, broader campaign objective: to change how we look at men.

Project founder and creative director, Angus Malcolm, explained the thinking behind the shift:
“We started Warwick Rowers to challenge homophobia. But research at Sport Allies (the registered charity that now receives all WR profits) shows that homophobia is part of a bigger problem: straight men still get a different deal to everybody else. We need to keep challenging homophobia and promoting LGBT rights, but we also need to address gender inequality and encourage better male mental health”.
The project has famously been doing this for ten years by inviting sportsmen to pose nude. Malcolm went on to explain why.
“We believe it is a relevant yet engaging way to confront how we feel able to look at men, and how men see themselves. Happily, both our participants and our supporters around the world seem to agree!”

Earlier this summer, Spartans were pleased to be featured in one of the three superb films created in conjunction with Sky Sports and London Film School when we were followed throughout our 2019 Union Cup campaign in Dublin, Ireland.  The films premiered on Sky Sports on the 23rd-25th September.

We were also delighted that Angus and Tristan from Sport Allies attended our 20th Anniversary gala and walked with us in the Manchester Pride Parade.
For more info about Sport Allies, visit their website here where you can also watch the Spartans film.